Stella will be four years old on Valentines Day, according to the date of birth that is listed on her Circle of Hope K-9 Rescue adoption papers.  Bianca, (her former name) was one of five puppies that were left in a box near the Rescue’s kennels.  At least whomever abandoned the baby dogs had the sense to leave them in a location where they knew they would be cared for. 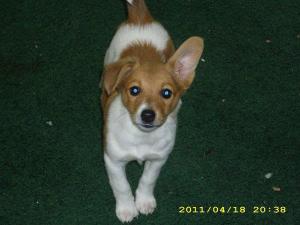 How could I not give this dog a home?

Also noted on Stella’s adoption papers was her breed.  Rat Terrier/Pomeranian mix.   Pomeranian?  Highly unlikely. She is an American Ninja Terrier through and through I thought, as I looked at the photos of the litter that had been sent to me.  Adorable? Absolutely. Garden guard dog potential?  Possible.  Knick knack, paddy-whack, give the dog a home?  Definitely.  And so her journey from Milan, Tennessee to Middlebury, Vermont began. 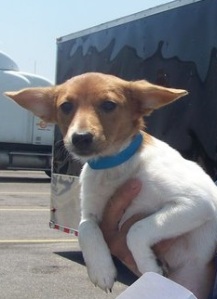 I adopted Stella in March, but had to wait until June to receive her. The adoption fee includes spaying and neutering, first round immunizations, complete health assessments, and transportation fees.  Once given a clean bill of health, the adopted begin their journey to their new home.

Stella and her litter mates share a crate for the journey.

1,200 miles later, Stella and her fellow travelers arrive safely to their destination in New Hampshire where they are released to their adoptive families, or foster home volunteers.   It is an amazing network of compassionate people that willingly give of themselves to make these types of programs work.

A shy Stella and her human are united.

I’ll be making Stella a special batch of her favorite dog treats for her birthday next week, and will be making a donation to the Circle of Hope to express our gratitude and support.  The little dog, I think, approves.